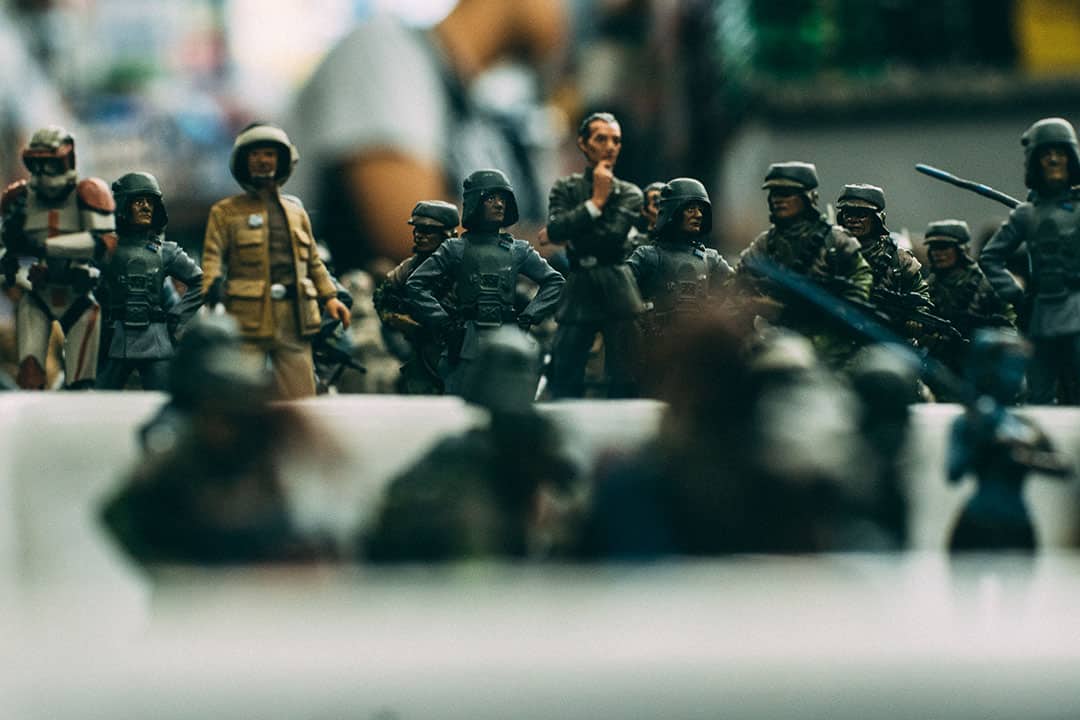 War. What is it good for? Absolutely nothing?

The issues that Muslims may face when going to war, especially when fighting for colonisers.

Islam has very specific guidelines surrounding war. To summarise, war is permitted in self defence, whether that is in defence of a nation or of a group of Muslims. The rules surrounding war however, must be adhered to and these include not injuring or harming non-combatants, using the minimum force necessary, without anger, and treating prisoners of war in a humane way.

The idea of unrestricted conflict is un-Islamic with the Qu’ran saying:

“And fight in the Way of Allah those who fight you, but transgress not the limits. Truly, Allah does not love the transgressors.”

Similarly, Islam, deriving from the Arabic word Salaam (meaning peace), values peace above all else, especially as killing innocent individual can lead to grave error and Hellfire, and how can one be entirely certain on who is not innocent? One would need to be one hundred percent certain, and willing to justify it on the Day of Judgement. It is also mentioned,

“Anyone killed a person not in retaliation of murder, or (and) to spread corruption in the land, it would be as if he killed all of mankind”

Islam has a very specific and strong set of rules for beginning war with someone, and a very severe punishment for unlawful war.

War is a contentious issue, particularly amongst Muslims in the UK – who were some of the most critical opponents of recent conflicts involving Britain, including the wars in Iraq and Afghanistan. It’s a difficult position to be in when the country in which you live goes to war against your fellow Muslims. It can create feelings of identity confusion and like one doesn’t quite belong. It also is difficult for Muslim members of the army who may feel uneasy warring against fellow Muslims.

Muslims in colonised countries have been co-opted into fighting for their colonisers for hundreds of years. South Asian Muslims were forced into fighting for Britain during World War 2 in addition to Algerian Muslims being forced to fight for France. [There are countless more examples, however, for the purposes of this article we will focus on these] Forced to fight for Britain and France, despite the terrible atrocities that Britain committed in the Indian subcontinent all in the name of empire building, and that France committed in North Africa. Yet, regardless to this, it has meant that Muslims are not accepted in the country they fought for and made homes of.

Despite these sacrifices, Muslims still aren’t considered equal or part of the country they helped to shape. Likewise with Algerian Muslims in France, discriminatory laws have been introduced which target Muslims in France and the government are complicit in structural and institutional Islamophobia.

Look at the rising Islamophobia against Muslims in the UK “But Muslim doesn’t equal South Asian!” True, but for a lot of people, they target South Asians because they believe it to be synonymous with Muslims and Islam. We should remember that being nationalistic (nationalism can be to the exclusion or detriment to other nations, even the Ummah and not encouraged in Islam) is separate to loving one’s country, since even the scholars attributed themselves to their place of birth!

So where does mental health fit in all this? Knowing that your fellow muslims have done everything for the country in which you live and call home, yet it’s a country that does not accept you and whose politicians reiterate anti-Islamic sentiment at every opportunity, means many people are suffering from a crisis of identity, not knowing who they are and where they truly belong. This can lead to anxiety around themselves and increased likelihood of depression as they feel the country in which they live is against them.

We hope this month’s topic gave you some insight and alternative perspective on War, Muslims and Mental Health, be sure to let us know how you feel about this topic in the comments below!