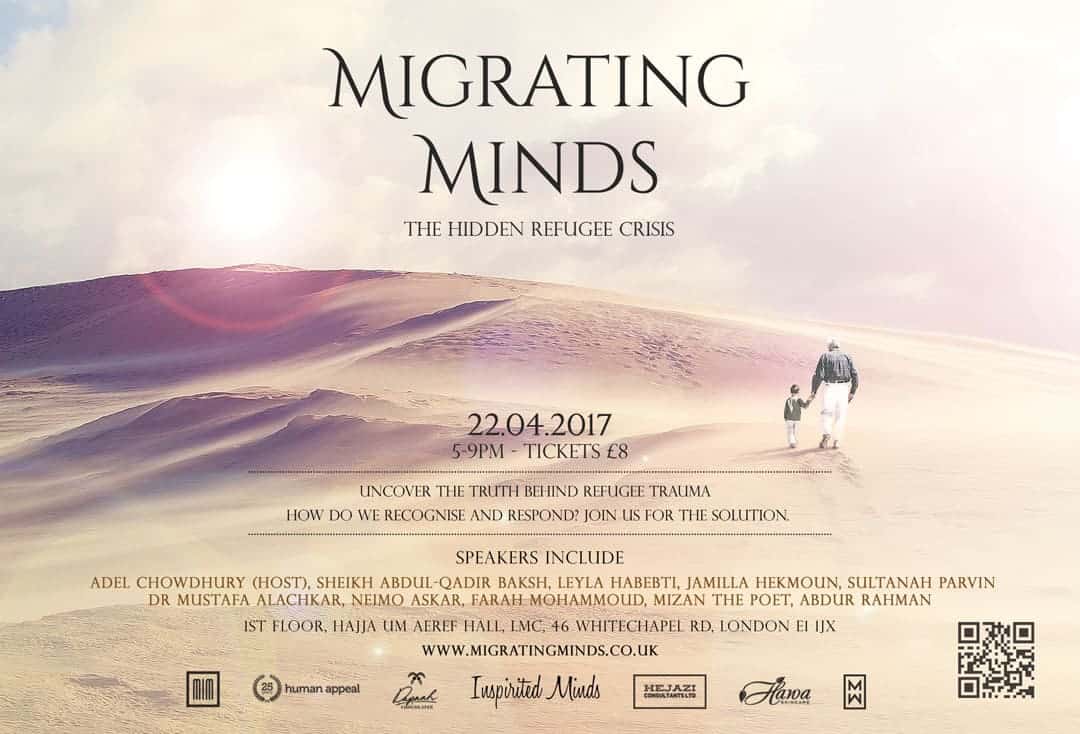 You are a part of the solution

In the past month, several newspapers have reported on resignation syndrome which is a mental health disorder affecting young refugees by putting them in a coma-like state. A medical journal  Acta Pædiatrica describes those affected as “totally passive, immobile, lacks tonus, withdrawn, mute, unable to eat and drink, incontinent and not reacting to physical stimuli or pain.”  A doctor volunteering for Doctors of the World said “They are like Snow White. They just fall away from the world.”

This is just one of the many ways refugees are suffering from mental health disorders today.

On the 22nd of April, Inspirited Minds is hosting Migrating Minds, an effort to shed light on a crisis that up until now has remained virtually invisible, hidden and hushed. When researching the many causes of mental health disorders, some were definitely more surprising and invisible than others. We would expect things like violence and isolation to be huge contributors, however smaller issues such as language barriers, poor communication and under diagnosing are at the source of poor mental health simply because it is forgotten about. The struggle to convey how they are feeling and having to rely on translators can result in frustration, a lack of control and a feeling of suffocation. All things which lend themselves to anxiety disorders.

“I suffocated in 2002 because I couldn’t speak.”
Congolese advocate, Nottingham, Mind

To begin understanding the causes, we need to understand just who and how many people are being affected. Statistics show that there are more people leaving their homes than ever before, an estimated 1 billion in the world today,  working out to mean that 1 in every  7 people of the world’s population are migrants.  65 million of these migrants are being forcibly displaced, 5 million of whom are Syrian, and studies show that 1 in 3 of Syrian refugees are  suffering from depression, anxiety and PTSD.  However, these reports never give the full picture as due to language, cultural barriers, and other competing priorities mental health disorders are often misdiagnosed or unrecognised altogether.  Inevitably one of the biggest causes of these disorders is the sheer amount of death, and torture migrants have to come face to face with. The UN refugee agency described 2016 as the ‘worst year we have ever seen’ in regards to migrant deaths, with the likelihood of dying to be 1 in every 88 people.

Empathy and outrage are commonplace when we hear about atrocities taking place across the world. Too often images and videos circulate the internet when crises occur e.g. the recent gas attack in Syria, led to a flood of sympathetic messages, fundraising efforts and an uproar in an attempt to help those affected. However the same empathetic response seems to just fade once the refugees reach “safety”. The implications on their mental wellbeing from  leaving their families behind and grieving their loved ones amongst many other traumatic experiences seem to bypass the public’s sympathetic efforts and their struggles with their mental health in a new and foreign country becomes an isolated one.

When hearing these overwhelming statistics and stories it can feel impossible to help, but the most important thing we can do is to listen and understand. So many of these mental health issues are stemmed from a lack of control, lack of a voice and lack of understanding. By understanding their issues, by empowering ourselves with education about refugee well-being, we can help to empower those who are suffering. Doctors, therapists, activists, charity workers and just the average person can only help so much without learning about the culture of the refugees, the war which they have fled and the situations they have fled from.

To be a grounding source for our brothers and sisters, we need to truly understand, empathise, and communicate.  That is where Inspirited Minds comes in, join us to uncover the hidden truth behind the trauma. How do we recognise and respond?

We are hosting Migrating Minds: A Hidden Refugee Crisis, an event that hopes to explore the problems and potential solutions surrounding refugee mental health, examining the travesties and calamities many face. Focusing on the consequences of their traumatic journeys, with the raw truth revealed, it’s time we were anchors for our troubled brothers and sisters. Including a survivor story, aid worker experiences, professionals within the field, spoken word, community projects and activists, accompanied with dinner and refreshments.

Remember, you are a part of the solution.

As someone who has suffered from depression and anxiety and a big mouth from a young age, Sabrina is a huge advocate for Mental Health Awareness and believes it deserves to be spoken about a lot. She is the creator of BySabrina.co.uk a candid blog discussing topics like books, family, and her experience with mental health, with humour and honesty.